Today, brides are using really creative ideas to put a twist on a wedding staple – bouquets! This yet another area where art and self-expression combined can create a stunning statement with a not-so-traditional bouquet.

Instead of the standard bouquet carried by the bridesmaids, consider a wreath or a simple pomander bouquet. 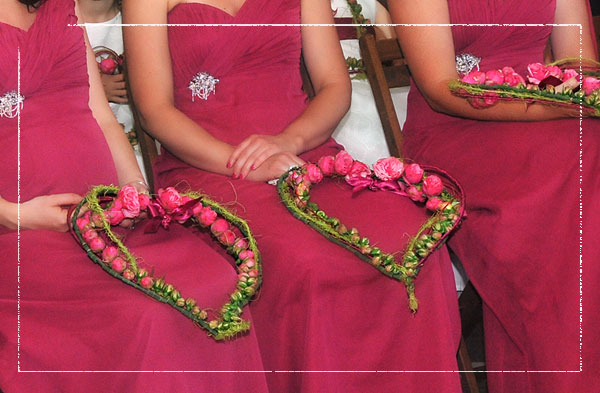 Whether it is a single vibrant color or eye-catching combinations, you can use color to make a big impact.

Consider something fun, funky and functional like a fan for a hot summer wedding, or a muff for a winter event. 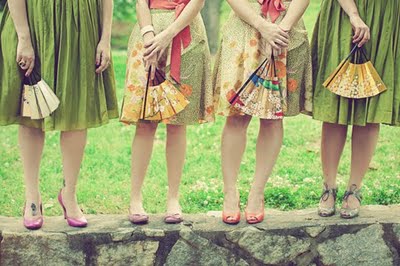 When it comes to your wedding, the only rule is that there are no rules. Ask you florist to explore other floral options if you feel like the traditional bouquet is just not your style.

It is often said you can never be too rich or too thin. Personally, I am in no danger of being either one so I can only speculate on how difficult it must be to be both at the same time (insert eye roll). Some of the wealthiest, most beautiful women in the world are not high-profile celebrities and although they do have their share of wedding dilemmas,  it can’t compare to the pressure and burden of being Angelina Jolie during the planning of her eventual wedding to her equally high -profile (megastar) fiance, Brad Pitt. Especially since she is often critiqued about being too thin and probably too rich as well.

Of course she can hire planners to do everything, have stores closed down for shopping, visit designers showrooms and have all wedding attire custom designed and fitted to perfection. However, there comes a day (the wedding day) when all eyes are upon her and she has to find a gown that can stop the critics dead in their tracks… that is, if she cares at all. Critics (like me) who can be cynical and in other cases downright unkind.

The question remains, if you are Angelina Jolie, what will your wedding be like? My guess is completely toned down. Think of Kim Kardashian’s fairytale (staged) wedding and imagine the exact opposite. Not to the degree where people are eating off paper plates but you can bet that the wedding will not be televised unless the profits go to AMFAR or one of this power couple’s other pet projects.

Personally, if I were in her shoes, I would find a diaphanous gown of varying pastel shades, have all the children suited accordingly in matching pastels, find  a secluded spot in the English countryside, invite only close family and friends (and their kids) and have a charming afternoon event that is more about the ceremony than a lavish reception. If it were me, and I was thin and rich and high-profile, I would completely engulf myself in the Victorian/Antique theme that is so hot right now. I would do anything and everything to have  a casual, rustic, family gathering with Peonies, Hydrangeas,wildflowers  and antique china place settings. I would make it intimate, heartfelt, and completely understated. Kids? Yes. Foreign dignitaries? No. More than anything, I would make sure the vows are extraordinary and memorable.

Most of all (dare I say?) I would not have a strapless gown no matter how good I looked in it – just to protest the lack of options and being a super-powerful, mega-wealthy Hollywood star, you can do anything you want! 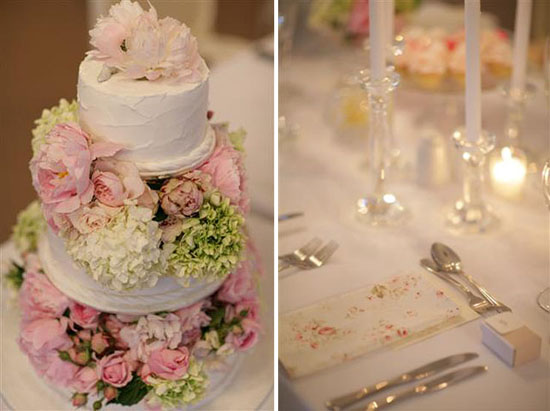 Most adults don’t really get into Halloween as much as children. However, if you are one of those rare couples who really get into the spirit -Halloween is one of the most perfect times of year to get married. From the invitations to the decor, there are endless possibilities to get you and your guests in the Halloween Spirit. You can keep it low key and lighthearted or use this as the perfect opportunity to have a full costume ball.

Have your reception in a mansion or historical venue to take advantage of  the ‘haunted feeling.

Lighting can go a long way to create a spooky effect without being ridiculous.

Bridesmaids gowns in deep fuschia or purple with black accessories will create the same effect as ‘Halloween’ Orange.

This would be the perfect time for the groom to wear tails. Very Phantom of the Opera.

There are only a few mistakes you can make – the worst is making the entire event cheap with candy corn, spidery ghosts, trick drinking glasses or fake blood of any kind for any reason. Other than that, this is a spook-tacular time of the year to get married! Did you ever wonder how June became the most popular month for weddings? Why do brides carry a bouquet? Where the phrase “tie the knot” came from? Weddings are fraught with trivia that most people take for granted and never seem to even question. Wednesday seems like a good day to delve into the strange and wonderful world of wedding trivia!

June became the most popular month for weddings during the Victorian era because most people took their annual bath in May. Gross.

Brides began carrying fragrant bouquets to mask the smell of body odor. Even more gross, right? But, it explains the immense size of Victorian bridal bouquets. The phrase ‘tie the knot’ came originated in Rome where the  corset had knots that the groom had to untie in order to undress the bride. It seems backwards, doesn’t it? But, in modern times it would seem odd to say you were “Un-tying the knot”.

In Old English, the word ‘bride’ actually means ‘cook’. I found that amusing.

Something blue? Most people think the blue item is to represent purity and fidelity. In Victorian England, the bride and groom were considered to be royalty (for the day) and the something blue was the blood of royalty. I would still wear blue shoes, it has a nice ring to it even if they aren’t suede. Wedding veils originated in Ancient Greece and were worn to ward off evil spirits. The veil was worn over the face to protect the bride until she was safely presented to her future husband at the altar.

The tradition of bridesmaids dressing the same as each other and in similar style to the bride comes from ancient times when it was believed that evil spirits have a more difficult time distinguishing which one is the bride and putting a hex on her. In Ancient Rome a marriage required 10 witnesses in order to be legal. The tradition of exchanging rings began in 1477 when Roman Emperor Maxmillian I gave his future bride a diamond ring. Women around the world decided “That’s a great idea – where’s mine?”

Engagements came about when Pope Innocent III  instituted a waiting period , and insisted a ring be used in the wedding ceremony.

The engagement ring and wedding band are worn on the fourth finger of the left hand  because the ancient Egyptians thought that the “vein of love’ ran from this finger directly to the heart.

When we drink to someone, we call it a “toast” because of an old French custom where a piece of bread was placed at the bottom of the wine cup for flavor. In France, partygoers would drink and pass the cup; when it reached the person being toasted, he would empty it – crouton and all.

Throwing the bouquet  dates back to Victorian England where the wedding guests would chase the bride, tearing her clothes and flowers in order to grab a piece of happiness.  The bride would toss the bouquet in order to distract the crowd long enough to make a clean getaway (hopefully with her clothes still intact).

The custom of tiered cakes emerged from a game where the bride and groom attempted to kiss over a higher-than-ever cake without knocking it over. Last but most interesting of all, the bride stands at the altar to the left of the groom for practical reasons. In Medieval times, the groom needed to keep his right arm free so he could use his sword to protect the bride. I am wondering if there was an accommodation made for the less than 10% of grooms who are ‘lefties’ or if they had to improvise?
If all of these customs and trivia seem too  much to remember, just be glad you don’t live in Denmark where brides and grooms cross-dress to confuse the evil spirits.  Which makes me wonder how smart those evil spirits really are since they all seem to be so easily confused.
-Penny Frulla for Bridal Expo Chicago