No ‘End of Year’ blog would be complete without a fashion roundup. There were so many fabulous red carpet moments that it is hard to find a top five or even ten to highlight. However, the really, really hideous ones are not only less in number but, also really standout this year!

First, let me state for the record that bad red carpet fashion does not include outfits that are intentionally designed to shock or be a costume. Any Halloween outfit even for a charity ball is automatically excluded, any outfit by Lady Gaga or Niki Minaj or Madonna or Elton John is automatically excluded. This helps to level the playing field. Seriously – if you are trying to look ridiculous, it shoudln’t count.

Stella McCartney in Stella McCartney. Really? There is really nothing nice to say about this puckered, weird, ill-fitting jumpsuit, so I won’t even try. Florence Welch in Alexander McQueen. I get that she is an artsy actress and very intense and all….. but, yikes! Somebody buy this woman a full length mirror. Fantasia Barrino in a hot, sequined, mess. I wonder why I couldn’t find any name associated with the designer of this gown. Hmmm… Maybe nobody would admit they had anything to do with it? Fergie in Jean Paul Gaultier. At home this may have seemed risky, edgy and really avant garde. On the red carpet it was absolutely hideous. The worst part is that she is really a total knockout. Beyonce in Givenchy Haute Couture. #1 – this is the Met Gala. #2 – the inner part is like a bodysuit made of sheer nude fabric that is puckered and bunched up in places. This is perfect for a Halloween gala but nothing else. Make your 2013 New Years Resolution to read Bridal Expo’s blog every day and like us on facebook for up-to-date tips, trends and specials on all things bridal and wedding related!

The award ceremony is over, the gowns and tuxedos either sent off to the cleaners, returned to the designers or draped over the back of a chair. But, the fun has just begun, because the “What were they thinking?” portion of the program has taken over and it’s time for us to take a peek at the hits and misses at last night’s Emmy Awards.

I have broken it down into three categories; Belts, Boobs and Breathtaking

Julia Loius Dreyfus in Vera Wang; ditch the belt and you have a winner. Love the neckline. 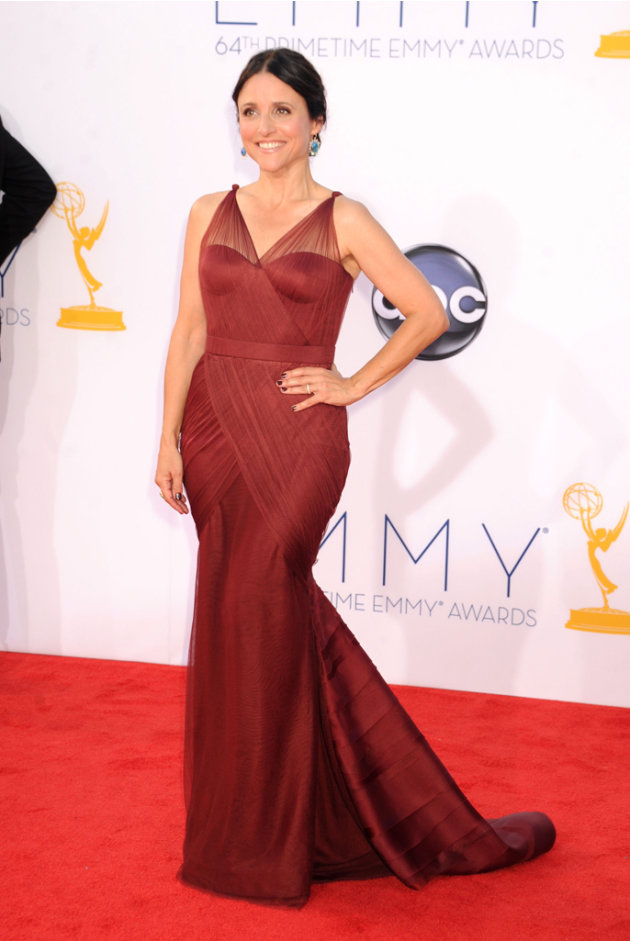 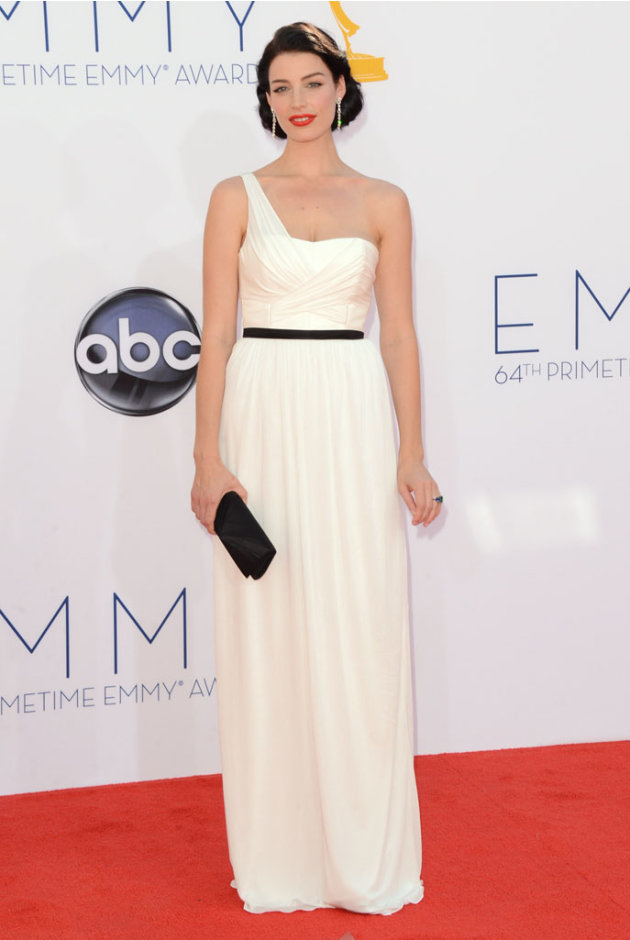 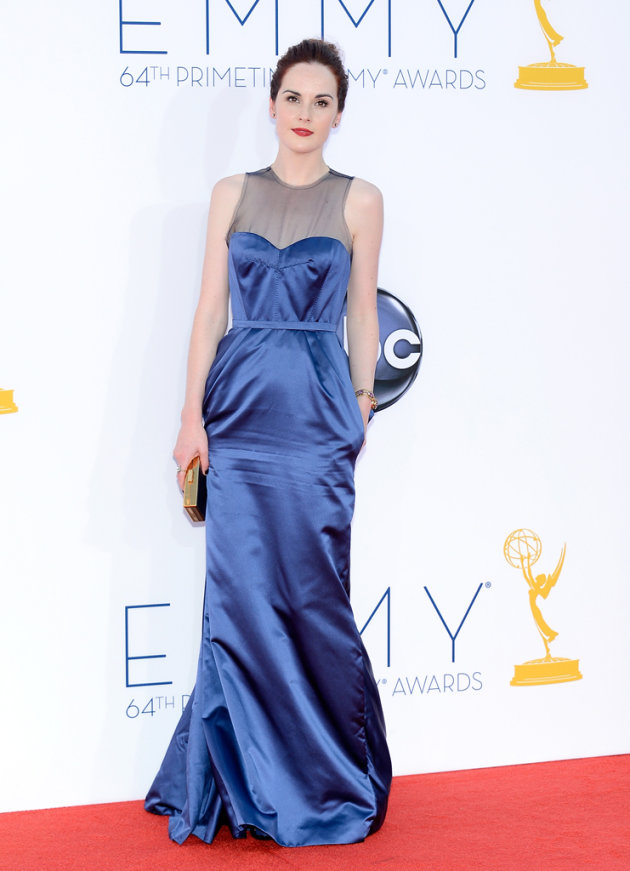 Sarah Paulsen’s Reem Acra gown was jaw-dropping on her. The belt broke up some of the details in the shimmering lace appliques and made the dress more interesting. 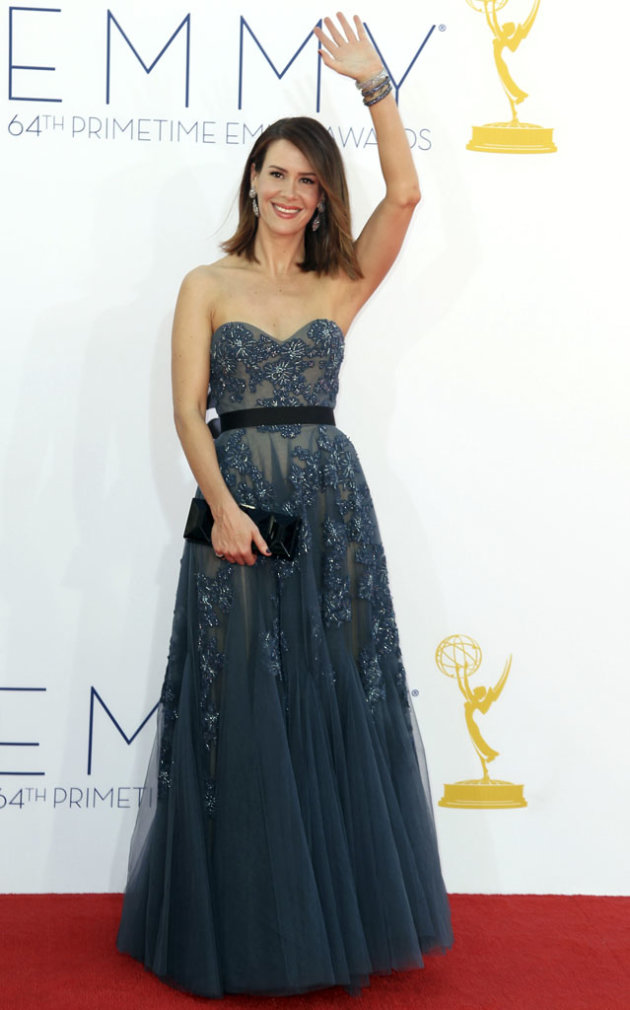 Actually Christina Hendricks falls into the Boobs and Belts categories. Can you guess why? The belt is too big and her bust is too enormous for this not-so-flattering Christian Siriano gown. When she said it was “Old Hollywood” I am assuming she meant Mae West. 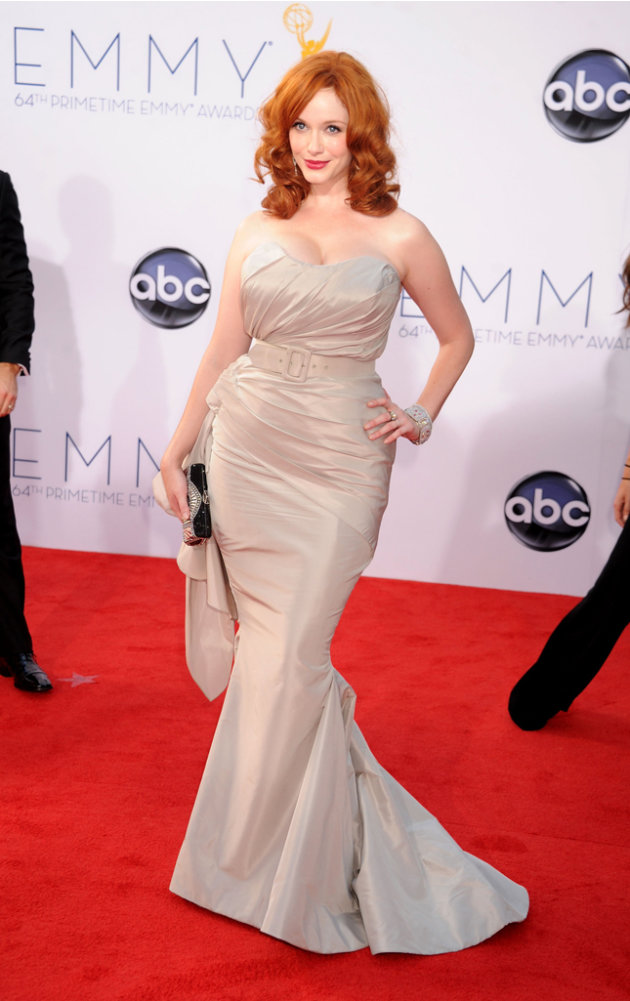 Morena Baccarin need some more tape to keep things in check. In reality this gown would look best on someone who has a nearly flat chest, otherwise you appear to have “pancake boob”. 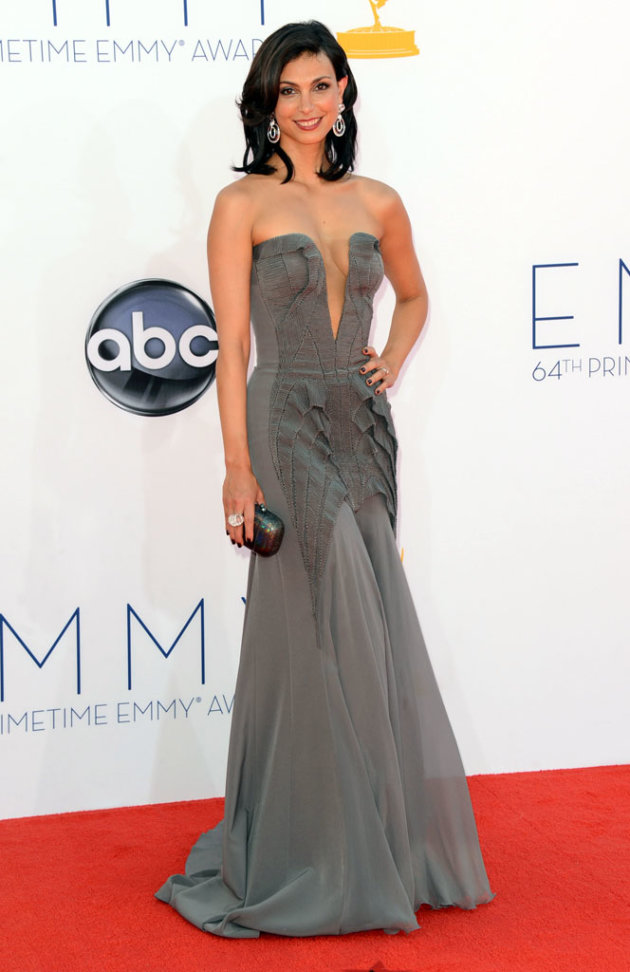 Kat Dennings posture was the most important accessory she wore last night. One false move and either one of ( or both) of her knockers would have come flying out. Not the right dress or maybe just a bad fit? 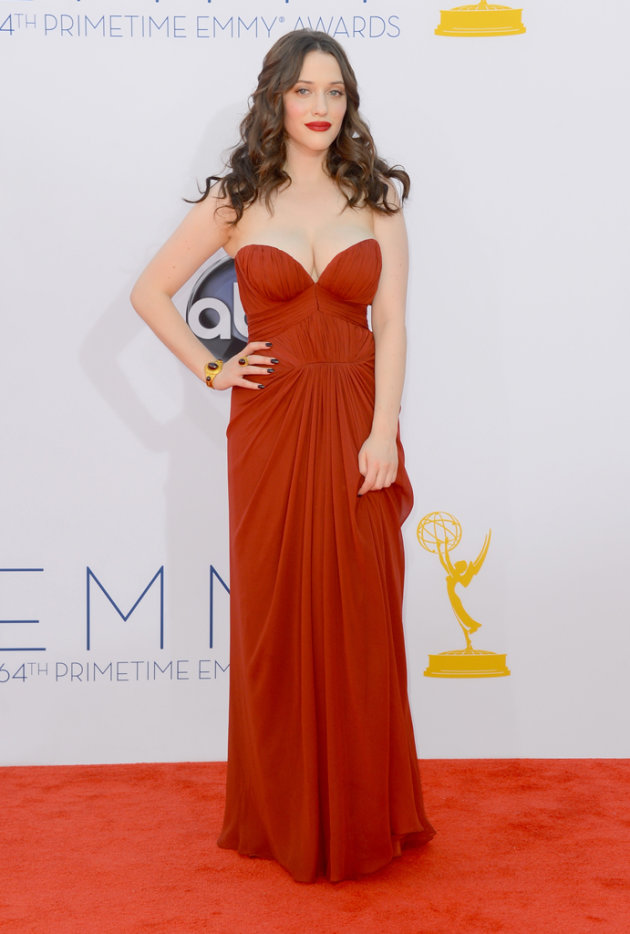 Sofia Vergara was positively shimmery in her gown by Zuhair Murad. The problem? Aside from the fact that she looked like a Miss Universe contestant, there was too much side-boob. Plus, did she just jump out of the shower and throw on a beaded gown? Spend some time on your hair! You are gorgeous and you can wear anything but, you have been around long enough to know that you need to step it up. Next year- we all expect you to  bring it! 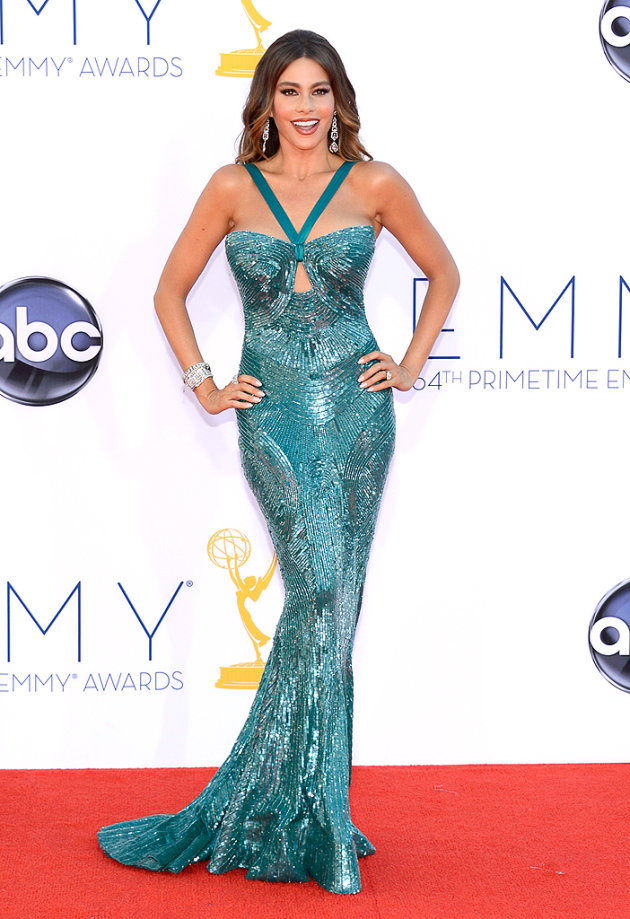 Jane Fallon,  longtime girlfriend of host Ricky Gervais had the right gown for her figure, in the right color for her skin and a perfect fit. Love everything about it. 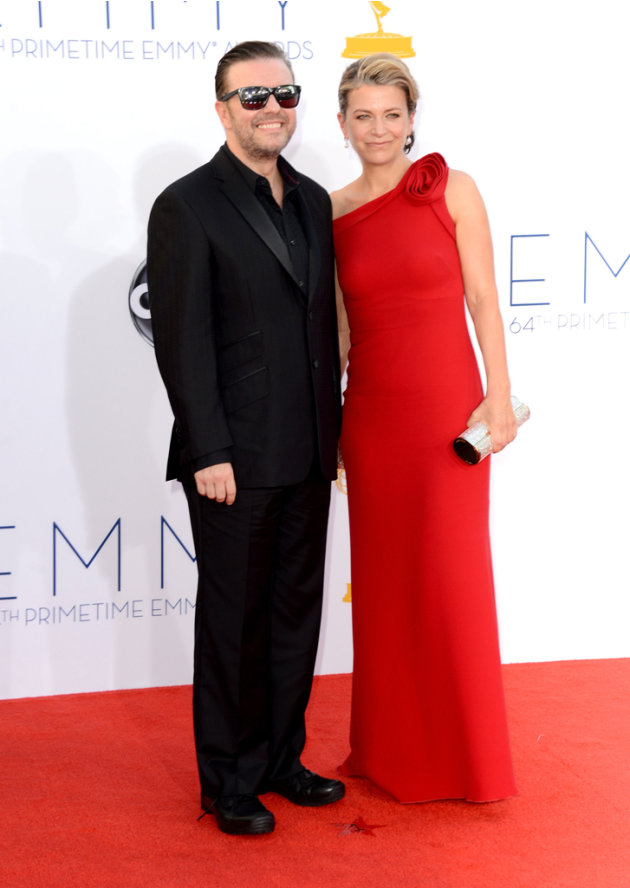 Julianna Hough was showstopping in a seafoam green beaded gown by Georges Hobeika. This gown was simply gorgeous; the cut, the detail, the color – LOVE IT! 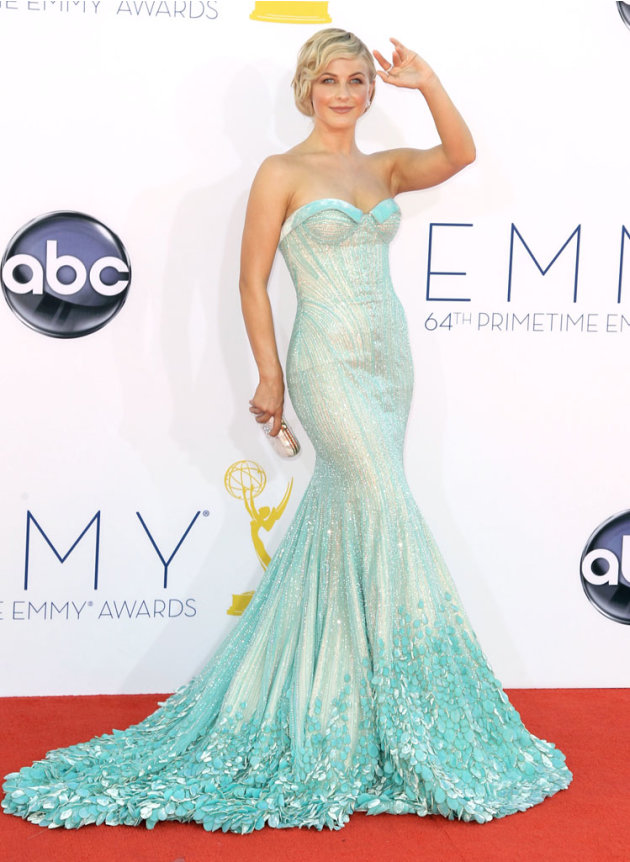 January Jones took a serious fashion risk with the Zac Posen gown. Looking as if it was made entirely of horsehair braid, this gown is a work of art. Not like one of those  Lady Gaga ‘artsy’ gowns made of meat  but, a gown that is so well constructed and so well thought out that it almost has the opposite effect: to appear to be thrown together. Look at it again. Look at it again. It is a work of art and it fits magnificently. She dropped the ball by not accessorizing, wear clunky shoes and not doing something a little more deserving with her hair. When you wear a piece like this you have to go the extra mile. 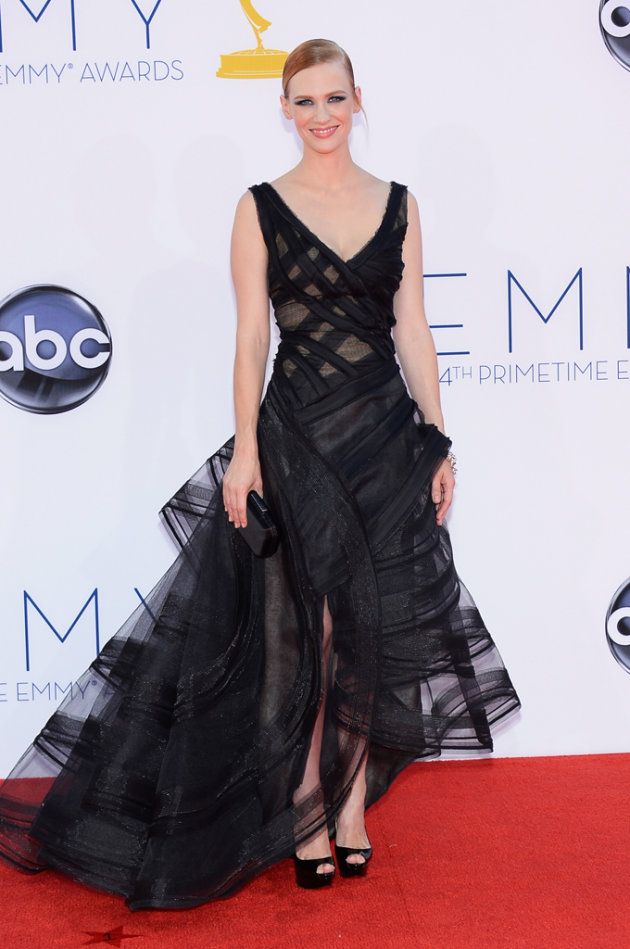 Who were you favorites from the 2012 Emmy awards?