The election season is in full swing, both parties’ national conventions have come to a close and now it is time to look at what’s really important: Fashion! Okay, realistically –  it doesn’t matter what the candidate’s wives wear before, during or after the election but, it is easier for me to debate fashion than policy with most people since one is a matter of personal opinion and the other is a matter of personal opinion… wait… it’s the same thing?

Anyway, I thought it would be fun to take a break from wedding planning and peek into the closets of the candidate’s wives.

Janna Ryan – She  may not be a household name yet, but, don’t mess with her because this 43 yr old former lobbyist is in good enough shape to kick butt and take names. With about 0% body fat from where I sit, she can wear literally anything she wants but, she opts for slim straight, ultra conservative looks straight from the Talbbot’s catalog. Don’t hold your breath for any trendsetting, just solid clean lines and simple silhouettes. Really simple. So simple that it is almost impossible to find any kind of style.

Jill Biden – When the Vice President-elect’s wife, a life time educator, showed up in January 2009 at the Inaugural festivities wearing knee-high boots, I thought this was someone I could relate to…. she has a fun side. Although still very conservative, she showed up later that night in a stunning red strapless gown by one of our favorite designers, Reem Acra, looking both youthful and stunning. Still not one to go all out glam, she can wear anything she wants with her with slim figure and great arms for any age. Ann Romney – Mrs. Romney’s style might be best described as quiet sophistication. With abundant wealth and  nice figure, the world is at your fingertips, which is why her Oscar de la Renta convention dress seemed an odd choice to me. It was slightly dated, reminiscent of a 1950’s housewife; a simple shirtwaist dress in bright red. In any color or shape, she exudes class and style and knows exactly what appeals to her audience. 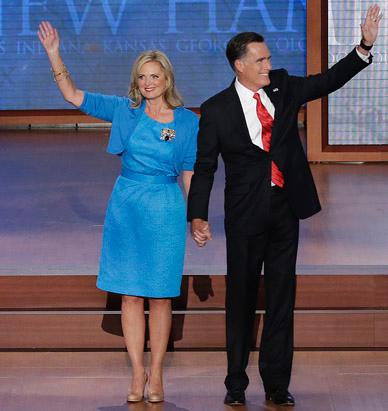 Michelle Obama – The First Lady is all over the map when it comes to style, mixing expensive pieces with vintage pieces with Old Navy. You never know what she will wear but, for the most part she hits it out of the park. Never afraid to accessorize, her style is way less conservative than her counterparts and she will occasionaly surprise with a quirky, chic ensemble that could never be described as boring.